Recently, a fitness equipment manufacturer was weighing a kit of parts and their current weighing system was still allowing an unacceptable quantity of quality control problems. The ideal product for the fitness company was a Doran 2200cw scale. Below is a summary of what was installed at their facility.

A system was proposed that would automate and simplify the process and retain the accumulated weight through the process of weighing several components of a parts kit. By connecting three Doran 2200CW over under accept check weigh scales together and using foot switches to activate certain push buttons, Doran was able to construct a system that allowed the employees to accurately weigh the kit of parts even though the weighing process took place across three workstations – all without pushing buttons on the scale front panel. 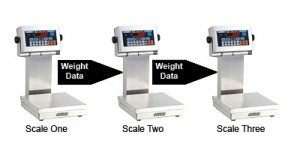 Three 2200CW check weigh scales were set up using RS-232 cables so that scale number one sent weight data to scale two, and scale two sent weight data to scale three. The first 2200CW check weigher was set up for an over value of 1.2 lb and an under value of 0.7 lb. The employee weighs the items at the first scale and then presses the PRINT foot switch on the first scale. That weight is sent to the second 2200CW and would be automatically programmed as the tare value in the second scale.

The second 2200CW scale is set up with a target weight of 2.2 lb. A component is added to the kit of parts and would be weighed on the second scale and the GROSS/NET foot switch would be pressed to change it to gross mode. The PRINT foot switch is pressed and the total weight (including the tare value sent from scale one) is transmitted to scale three.

On the third and final 2200CW scale, another part is added to the kit. The GROSS/NET foot switch is pressed, to put the scale into gross mode. The weight of all the parts is shown on the display of scale three.

This is just one example of what is possible with Doran scales and the huge choice of available options. If you have a unique weighing application, contact us at Central Carolina Scale and we can get a Doran scale system quoted for you that will save you money and increase your efficiency.