Your Top Choice for Buying Scales

Home
>
Load Cells - How To Choose

Load Cells - How To Choose

Load Cell Selection for Hostile Environments
and Other Challenging Applications

One of the first items to consider is the environment where the weighing apparatus will be used.

If the answer is yes to any of these questions, further investigation needs to be done. 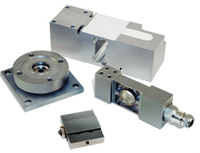 Tool steel elements are by far the most popular load cells used today. The cost-to-performance ratio is better, compared to other materials used in load cell construction. The most popular alloy used is 4330. Tool steel load cells are relatively inexpensive, have a large capacity range and are best used in dry applications.

Aluminum is primarily used in single point, low capacity applications. The aluminum of choice is 2023 because of low creep and hysteresis. Aluminum is the least expensive of the three materials used to manufacture load cells. Aluminum load cells are limited by their low capacity range and should not be exposed to wet or chemical conditions.

The third material used for load cell manufacturing is stainless steel. The stainless alloy used is 17-4 ph. This alloy has the best overall performance of any of the stainless derivatives. Stainless steel load cells are more expensive than tool steel or aluminum, but their resistance to corrosion makes them an ideal choice in wet or corrosive applications.

Another important item to consider when designing a weighing system is how the load cells internal components are protected from the environment.

Environmentally sealed is used to describe several techniques, but ultimately is accomplished by one or more of the following: Rubber boots, glued on covers or potting the gauge cavity of the load cell. This type of sealing will protect the load cell from damage caused by dust and debris and moderate humidity caused by splashing of water. In no way will the load cell be protected from immersion under water or being exposed to pressure cleaning.

Another sealing technique used on load cells is hermetically sealed. This incorporates a welded cover or sleeve that encapsulates the gauge pocket. The cable entry area also uses a welded barrier to prevent moisture from wicking into the load cell, and shorting it out. This technique is generally used with stainless steel load cells as a stainless, hermetically sealed load cell should only be used in heavy wash down or chemical applications. This makes for a more expensive load cell but if long life in a hostile environment is desired, this is the most cost effective solution in the long run.

S-beam load cell are typically used when hanging or suspending a weighing system (used in tension). Every now and then somebody will refer to these as z beam load cells. Since only half of this cell is live while the other half is inert, it is important to ensure that it is properly positioned. A simple way to distinguish the top from the bottom of the cell is to look at which side the cable protrudes. This side is inert and should be placed in the upward position to avoid any weight discrepancies associated with the cable.

Shear beam load cells are manufactured in capacities of 1,000 pounds and higher. These load cells have an actual shear machined inside to protect the cell from side loading forces.

Today, canister type load cells are used for weighing systems in excess of 200,000 pounds per cell. That being said, today there are double-ended shear beam load cells that are available in capacities up to 200,000 pounds as well. Using a double-ended shear beam in a load cell mount eliminates the need for checking, thus eliminating added cost associated with a canister cell used in the same application. Most canister load cells are sold as replacement cells for older systems.

The number of load cells used in a weighing system also needs to be considered. When designing a weigh hopper system, it is preferable to use a three load cell system rather than four or more load cells. This is because a three cell system has the weight perfectly distributed on each load cell. When using four or more cells, it is vital to ensure that all cells are on the exact same plane in order to properly weigh. Portions of this courtesy of Paul Menge, Loadcell Product Mgr at Rice Lake Weighing