For our example, we are going to focus on the most common load cell which is the strain gauge cell.  A strain gauge load cell is a type of device used to measure weight or force. It is commonly used in a variety of applications, such as weighing scales, process control automation, and testing and measurement. The load cell works by converting a force, such as the weight of an object, into an electrical signal that can be measured and send weight data to a computer.

There are several types of strain gauge load cells. This type of load cell consists of a small metal beam or rod, often made of aluminum or alloy steel, which is attached to a base. The beam is designed to flex or bend slightly under the weight or force applied to it. 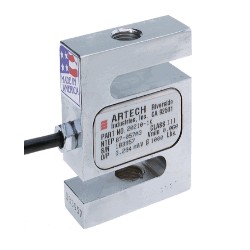 How Do Load Cells Work?