The majority of this article is provided by Rice Lake Weighing Systems. We have also added a few insights and thoughts of our own as well.

A load cell, also commonly referred to as a transducer, converts a mechanical force into an electrical signal. Basically, the load cell bends slightly when weight is applied.

In a compression mounted load cell where the load cell is beneath the weighing vessel, like a truck scale, the load cell compresses when a load is applied. This would apply to scales like the Cardinal PRC which has the SCA load cells.

Many load cells are proprietary to a specific manufacturer, and may require additional maintenance and costs of ownership. Carefully discuss with your scale supplier all options for load cell systems.

Analog Load Cells
The most common load cells on the market work on the strain gauge principle. All load cells need to convert their analog values to digital before the load’s weight reading can be displayed on an indicator.

The advantages of the hydraulic load cell typically relate to being resistant to lightning damage. The disadvantage of this type of scale and replacement load cell is the cost.

Some would say that because the conversion happens in the load cell, sensitive electronic components are increased throughout the scale system, making them susceptible to damage from vibration, moisture and increased solder joints.

Double Ended Shear Beam
This is the most widely used vehicle scale load cell configuration in North America. A double-ended shear beam load cell is a compression load cell that offers a large capacity range from 1,000 to 200,000 pounds.

The load cell also has the advantages of being less expensive in high capacity applications than the canister load cell because it does not require checking, making it virtually a maintenance free solution.

Canister
A canister load cell is the oldest load cell type. Also a compression device, it is shaped like a vertical canister and can handle loads from 100 to 1,000,000 pounds.

It is either hermetically sealed or welded to protect the gauges. This load cell’s drawbacks include the fact that it requires checking — installing check or stay rods to hold the weighing vessel in place on the load cell’s top plate during weighing.

Rocker Column
Some manufacturers prefer rocker column load cells because they are inexpensive. However, they require check rods and bumper bolts that require maintenance, increasing your cost of ownership. The cost saved by the manufacturer on the raw material is passed down the line to the end user in the form of additional maintenance.

Truck scale load cells are generally made of stainless steel or alloy steel, but most manufacturers offer a variety of load cell solutions that best fit your application needs.

Alloy Steel Load Cells
Load cells manufactured from tool alloy steel elements are by far the most popular cells in use today. The cost to performance ratio is better compared to either aluminum or stainless steel designs. The most popular alloys are 4330 and 4340 because they have low creep (the change in load cell output over time while under load) and low hysteresis (the difference between load cell output readings for the same applied load).

Stainless Steel Load Cells
Stainless steel cells are more expensive than tool alloy steel load cells. They are sometimes fitted with hermetically sealed web cavities, which make them an ideal choice for corrosive, high-moisture applications. Stainless steel load cells that are not hermetically sealed have little advantage over comparable cells constructed of tool alloy steel, other than a higher resistance to corrosion.

We hope you enjoyed learning more about the different load cells found in the average truck scale. Since 1980 we have been providing customers throughout the central part of North Carolina with truck scale inspections, scale repair and calibration services. Our test weights and weight cart are certified by the state of North Carolina for accuracy. Our scale technicians are highly trained and knowledgeable when it comes to checking and installing various brands of truck scales.

If you need your existing scale checked or perhaps you’re in the market for a new truck scale, please give us a call today (919) 776-7737.

Keeping your Truck Scale well maintained and clean is an important part of truck scale ownership. Not only is it good practice to keep your weighbridge clean, it also contributes to a pro active scale maintenance plan and can significantly reduce the risk of equipment downtime and inaccurate weighing.

Before we get very far with this entry, lets clarify one thing… When we say to clean your truck scale, we are typically referring to the areas where mud and dirt can build up and cause weighing errors. Having a pristine scale diamond tread platform is great but that is not what we are referring to when we ask, is your scale clean? 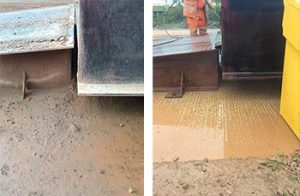 Over time, the build-up of mud and debris can have a negative impact on a weighbridge performance. Compacted mud can set hard and reduce the movement of the weighbridge. This in turn causes reduced accuracy in weighing. Certain types of site environment will suffer more with mud and related issues and weather conditions can also play a part.

Keep in mind, weighbridge cleaning can be a balancing act. You need to remove the mud and buildup so the scale platform can perform correctly. However, the water jet force required to remove dirt and debris from around a weighbridge’s critical weighing points can, if not performed correctly, damage load cells, cables, junction boxes, and summing boards.

When cleaning the scale, the lightest amount of water pressure you can use and still get adequate cleaning, the better.

Weighbridge maintenance should take place as part of a daily or weekly routine depending on the type of site. The build-up of debris and water should be monitored and obstructions should be removed from beneath the scale to provide clearance between the weighbridge and the ground. Otherwise, your scale accuracy will suffer.

Pit weighbridges should be checked to make sure clearances are clean and the correct gap between the deck and pit wall are in place. ‘T’ section rubber can be used to help maintain gaps and should be replaced if worn or damaged. Regular end-middle-end tests with a loaded truck should be carried out to review the accuracy of the scale to see if there are any buildup issues. This basic cleaning and maintenance can be carried out by a site foreman or truck scale weighbridge operator.

If you are a current customer and you are curious about cleaning your truck scale, contact us and we can discuss this further or we can show you the key areas during our next scheduled maintenance visit. If you’re interested in our services, please contact us at (919) 776-7737.