In order to update our Class F inventory to bring it more in line with ASTM and OIML tolerances, all Rice Lake NIST Class F weights will become ASTM Class 5 weights. Part numbers and pricing will remain the same, but the tolerance will be tighter. 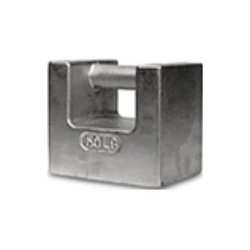 While existing NIST Class F calibration weights may be reclassified to one of the new specifications if all specifications and tolerances fully comply with the alternative standard, the NIST Office of Weights and Measures strongly recommends that you do not reclassify existing Class F weights due to the difficulty of performing compliance evaluation.

This change is taking place to accommodate for the increasing accuracy of weighing devices used for legal metrology. Class F weights are no longer sufficient for the calibration, inspection, or sealing of weighing devices used for the jewelry, marijuana and pharmaceutical industries. Similarly, hydrogen for hydrogen vehicles is being sold by weight, which demands a high level of accuracy.

We are here to help guide customers to select the right calibration weight for each application; however, selection is ultimately based on the customer’s unique needs and requests.

Feel free to contact us with any questions about the NIST Class F legal metrology change in Handbook 105-1 or questions regarding calibration weights by visiting Central Carolina Scale online. 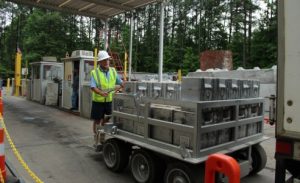 Recently, I was informed of a situation that involved a digital infant scale and a “test weight” also known as a 5 pound consumer barbell weight. Apparently, the barbell weight was used to check the digital scale and it was thought that the scale had not been calibrated correctly due to a scale readout of 5.2 lbs.

Rice Lake’s Metrology department has retained its world class reputation through its highly trained staff and adherence to stringent handling procedures–from receiving, to calibrating, to shipping. The information below from Rice Lake highlights the standard procedure that they use upon receipt of your test weights. Here you’ll also find the best practices that Rice Lake recommends for handling weights and standards to help you maintain the best quality and integrity of your weights.

Recommended shipping procedures for weights
Ship weights in cases and materials designed to withstand and repel the abuses of shipping.
Packaging peanuts should not be used with weights, as this type of packaging clings to the weights creating static electricity which can compromise the lab environment.
Alternative packing material is recommended as follows:
Styrofoam (not peanuts or smaller pieces)
Paper (not shredded as this also conducts static electricity)
Bubble wrap
Loose small weights should have crumpled paper (not shredded) packed soundly in between all weights and box.
Clean room cases should only be used for weight storage and are not recommended for the shipment of weights.
Shipping of heavy weights (10 lb or larger) in cardboard boxes is not recommended.
Larger weights should be individually wrapped or protected, supported with stiff packing material and double boxed for structural durability.
Small weight kits should be held shut with secure latches, rubber bands, or tape, and placed inside boxes or bags.

Rice Lake Weight Handling Procedure
All weights and cases are inspected for damage and scheduled for calibration upon arrival to the lab.
All stickers and marker are removed from the weights.
Precision weights receiving NVLAP Calibration are checked for magnetism.
A tolerance test is conducted.
Any follow up with the client is completed.

Required Standards Conditions
* All delivered standards to this laboratory are required to arrive with the following conditions:

All weights should be clean and in good repair.
Any cleaning, repair, or painting of standards in the metrology lab will incur an extra charge.

Mass Standards
Weights should be clean and in good repair.
Weights shall be identified with a permanent serial number or mark into the surface of the weight.
Stickers and marker are not allowed and will be removed. The added mass of the sticker may change the mass of the weight, possibly causing the weight to be out of tolerance which will invalidate the reported value on the certificate.
Individual weight kits shall also be identified with unique serial numbers.
Cast iron weights should have no evidence of rust, loose paint or adhering debris.
Analytical weights should be handled carefully. Tolerances are small, so dirt or abuse can throw them out of tolerance.

Cases
Interior of cases for weight kits should also be wiped out or vacuumed.
Cases should be sound with secure latches.

Checking scales with certified test weights is an important part of the overall service and calibration plan for both industrial and retail scales. The test weights used to check the scales are very accurate and are tested by the state laboratory at certain intervals to make certain the test weights are accurate and to make sure the scales that those weights are used on are tested and calibrated correctly. This scale check not only helps the company but also the consumer to make sure they are buying or selling the correct amounts of product. However, there are always going to be those who take shortcuts. END_OF_DOCUMENT_TOKEN_TO_BE_REPLACED

A customer recently mentioned having an odd question to ask.  His firm does stability testing on boats and ships, and has rented 1000lb NIST Class F Cast Iron Test weights in the past.  He was looking to do a similar test in the U.S. Virgin Islands and having problems finding a local vendor for test weights.

Curious, we asked what exactly do you use the weights to test?  Normally around here, the weights are put on a truck scale for a yearly calibration or to test a floor scale out.  The customer said, he does stability testing on ships and other small craft such as yachts. With larger ships, large blocks of concrete (which are weighed before the test) are often used; however with smaller vessels where deck space is tight, your 500, 1000 and sometimes 2500 lb test weights are ideal and are easy to handle.

They have the added benefit of being certified weights, thus there is little question about accuracy. On some smaller vessels they used the 50lb weights and moved the weights by hand during the test. Basically the test weights are placed on board and then moved transversely from side to side to apply a known moment as the heel angle is measured. Using the principles of naval architecture, the vertical center of gravity is then calculated.