What is Peak Hold?

There are several ways to describe peak hold, but for our purposes, we are going to say that a scale with peak hold enabled displays the highest reading detected by the scale or balance and holds the result on the display.

How Is Peak Hold Different From a Regular Hold Function?

This is where the “hold” function can get a little confusing. Many scales these days offer some version(s) of a hold function. Some offer a hold function that will hold whatever weight is on the scale when it stabilizes. Some scales will hold the stable weight and then increase the displayed weight if it increases beyond a certain percentage.

The regular hold function freezes the results on the display when the scale receives them. In this case, that means that the weight on the display would only show what first registered on the scale, paying no attention to the weight applied afterwards. So if your scale measures 3kg, 7kg and 5kg, it will hold and display 3kg. As mentioned above, some scales will go beyond this and display an increased amount if the scale weight increases beyond a certain percentage. Other hold settings average the weight and hold or “lock” the weight once it becomes stable.

Peak hold normally is the highest amount the scale has registered. It doesn’t usually involve all the averages and percentage increases. When the weight is held for dynamic weighing, it’s after the scale has averaged the results of all instances of weight registered. If your scale measures 3kg, 7kg and 5kg, it will hold and display 5kg. You see some of this on animal or livestock scales sometimes. This would not be “peak” hold.

While peak hold will record the highest value obtained rather than the first stable value, or the average of multiple values. It can be useful when a lot of weight is applied very quickly and removed just as quickly. If your scale measures 3kg, 7kg and 5kg on it, it will hold and display 7kg.

Why is Peak Hold Used in Quality Testing?

You don’t want cardboard packaging to fall apart because of the weight in the box. Peak hold can be used to determine a material’s tensile strength, which can help manufacturers determine if a material is suitable to contain and transport various objects, materials and chemicals.

Also, product consistency is very important. Imagine purchasing a bag of candy only to find that some pieces of candy melt in your mouth, while other pieces of candy hurt your teeth when you attempt to chew them.

You probably would not buy that brand again.

Another example, a can with potentially volatile chemicals needs to be made of a material that can withstand a certain amount of pressure build up before it breaks, or people could get injured. 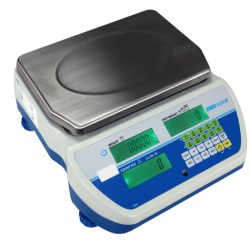 Many manufacturers use peak hold to test the amount of weight and pressure that can be supported by a part or piece to make sure components will not break from daily usage and stress on individual components.

The peak hold function can also be used to measure the highest weight for multiple weighing results in a short succession. For example, you can place an item, weigh it, remove it and place another one until you’re done measuring all your items, but the only weight recorded will be the highest one. Peak hold can also capture unstable weight spikes, while most weighing functions capture weight results once they are stable.

How is Peak Hold Used?

Some scales, like certain Adam Equipment scales, allow users to set a time interval in which the scale will keep displaying the recorded peak. The user can either have it displayed for that time interval before the display clears, or manually clear the display. Scales will often record and display a peak until another one is captured.

Material is sometimes weighed too quickly for the human eye to follow, or the sample is so bulky that it hides the display, which needs to maintain the weight to be read when the sample is removed from the pan. In addition, many quality testing facilities use systems with switches or remote mechanisms in place, so the scale or balance must be able to capture weight even if a person is not at the scale.

We have a customer who has purchased peak hold scales from us for many years. They measure the amount of weight that a person can lift by utilizing a S-Beam Load Cell along with a Digital Weight Indicator with Peak Hold Function enabled. The system has worked very well over the years and is currently utilized across the United States.